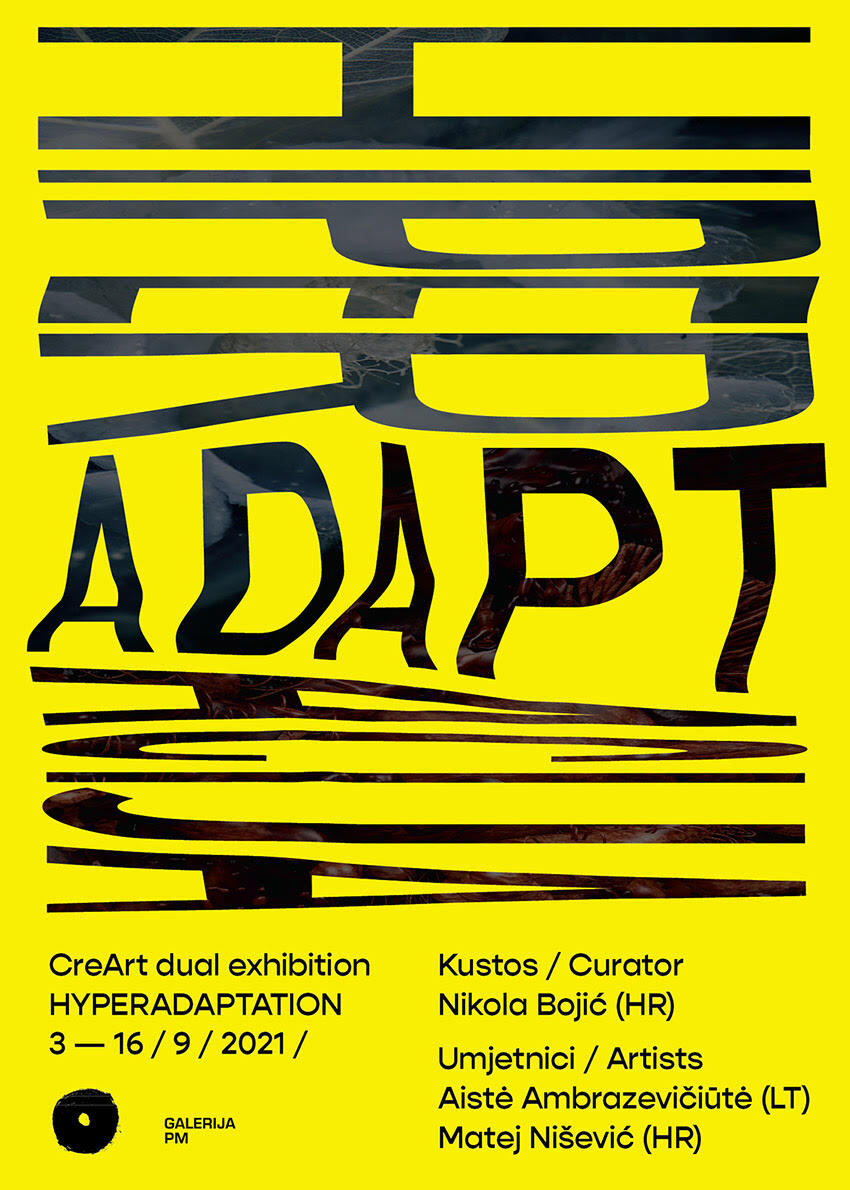 Within the EU project CreArt 2.0., we are announcing Dual exhibition "Hyperadaptation".
Opening of the exhibition will be held on Friday, September 3, 2021 at 7 pm in the PM Gallery, Meštrović Pavilion. The exhibition remains open until September 16.

The grand narrative of capitalism often relies on Darwin’s theory of natural selection according to which the strongest survive and the weaker ones gradually disappear along with their genetic material. But what if “the weaker ones” have actually never disappeared, but are incorporated into dominant entities from where they produce continuous, radical metamorphoses. Such a view of all living evolutionary processes is not just a fictional counterpoint to the theory of natural selection, but one of the fundamental biological principles that enabled the evolution of life on Earth. In the 1960s, the biologist Lynn Margulis published a theoretical article explaining the formation of more complex cells from the simple ones through endosymbiosis – a biological process in which dominant cells “digest” weaker ones, but the weaker ones do not disappear but continue to (co)exist within the dominant cells, changing them into more complex cells and organisms. Being “digested” thus does not imply destruction, but transition, metamorphosis and hyper-adaptivity to new circumstances. The unpredictable mutual digestion of organic and inorganic matter characteristic for the Anthropocene turns the evolutionary processes towards the genesis of hybrid organisms adaptable to the extreme biological and techno-climatic conditions. The human species may no longer play a dominant role in these processes.
Juxtaposing the artistic practices of Aistė Ambrazevičiūtė (1988, LT) and Matej Nišević (1996, HR), the exhibition examines the future in which endosymbiosis creates the circumstances for the emergence of hyper-adaptive organisms as biological, artistic and mental tactics for coexistence in the era of radical ecosystemic crisis. The Fusion Series by Matej Nišević speculates with imaginary planktonic organisms capable of absorbing microplastic particles from seawater into their shells and skeletons. The exhibited floating skeletons are produced through the meticulous chemical treatment of plant tissues (jasmine anthers, Peruvian strawberry follicle, Ficus leaves, large-flowered magnolias and ivy). The Grammar of Lichens by Aistė Ambrazevičiūtė provides a dive into a life of lichens – bizarre and complex living forms emerging from the symbiotic partnership of two separate organisms, a fungus and an alga. Through a series of high-resolution digital images and 3D prints, collided with lichens collected in Lithuanian forests, Aistė experiments with dramatically different logics of genesis, change and growth. By mashing designed, imaginary and real species, the exhibition faces us with the present and future of our own environments and bodies, which can no longer be observed through the orthodox divide between organic-inorganic, human-nonhuman, digital-analogue.

A porosity between these orthodox dualities becomes the main principle of the exhibition design. With Meštrović's pavilion as an artificial shell that filters sunlight towards mediated fragments of “nature”, the exhibition set becomes an unstable landscape which escapes the hegemony of the human eye. The composition of Matej’s artwork series follows the rigid rhythm of the pavilion's architecture. Yet, the sequence of his light, transparent objects hanging on the plastic strings acts like a plankton colony moving together with visitors. Set in a continuous motion, the final form of his work is impossible to capture and fix in a single gaze. On the other hand, Aistė's installation grows from the gallery floor. The overlap of the physical and digital forest presented on eight screens laid on the ground, renders new textural logic of the exhibition space. Visual exploration of the textures therefore requires specific physical engagement - crouching, bending, close-ups. During the pursuit of an appropriate forest’s, rather than human point of view, the exhibition engages the whole body, resulting in a fluctuating mash of human and non-human perspectives. The specificity of the exhibition setting thus transgresses the semantic limits of hyperadaptation, activating experience and body as starting points of adaptation to the worlds that are here and those that are yet to come.

AISTĖ AMBRAZEVIČIŪTĖ
Aistė Ambrazevičiūtė (b. 1988) is an experimental architect and digital artist based in Kaunas, Lithuania. During her Master’s studies at Academy of Fine Arts Vienna, Aistė found her forte in the experimental part of the discipline, which is often being excluded in practice. Her work focuses on the decorative arts of architectonics, where she celebrates and employs the forms, shapes and textures found in the intricate and complex nature of things. The goal of her practice is to stimulate the arts of noticing and visualising the unimagined reality. She is the creator of Plantasia Lab, where she designs digital plants using the intuitive imagination of technology. She is currently a PhD candidate at the Vilnius Academy of Arts working on the grammar of forest tectonics by lichens.

MATEJ NIŠEVIĆ
Futuristic metamorphoses and the evolution of marine organisms due to nanoplastic pollution, as well as healthy aquatic ecosystems, are the topics of Matej Nišević’s works (Sisak, 1996). In addition to BioArt, which he approaches using objects and installations, he is also interested in land art. He is a first-year graduate student of Graphic Arts at the Academy of Fine Arts, University of Zagreb, in the class of prof. Mirjana Vodopija and co-mentor Sunčica Ostoić, MA. He studied biology at the Faculty of Science, University of Zagreb in the 2018-2019 academic year (Department of Biology, course: Protista Including Molecular Biology and Genetics), its Botanical Garden and the Institute for Marine and Coastal Research in Dubrovnik (research and scientific education on plankton and the ecosystem of the Adriatic Sea, 2019-present). In 2019-2020 he held courses on botanical illustration at the Botanical Garden of the Faculty of Science in Zagreb.

Nikola Bojić is a researcher focused on the relationship between space, technology and the future. He graduated in Art History and Museology at the Faculty of Humanities and Social Sciences, University of Zagreb and completed his postgraduate degree at the Graduate School of Design, Harvard University. His research, curatorial and artistic projects have been presented at numerous international conferences and exhibitions, most recently at ZKM, Karlsruhe; Moderna Museet, Stockholm; Milan Triennial, Taipei and Venice Biennial. As a lecturer at the School of Architecture + Planning at MIT, he co-developed the course on art and techno-politics of models/modeling. Nikola has published a number of scientific papers, artist’s book Excavations: The Sinking Gardens and served as the guest editor of the 96th issue of the Život umjetnosti magazine, dealing with the issue of territory and mapping. He is currently an assistant at the Academy of Fine Arts in Zagreb and an affiliate researcher in the Art, Culture and Technology program at MIT, involved in the Climate Visions - artistic research lab which operates at the intersections of art, technology and climate changes.


CreArt 2.0. is a European Network of cities and private and public institutions. The project was launched in 2012 with the aim to respond to certain needs shared by European cultural institutions: to maximize the economic, social and cultural contribution that the visual arts can make to better support artists, cultural managers, the industry and the general public.
The holder of the CreArt project in Croatia is the Croatian Association of Fine Artists (HDLU), and apart from the HDLU, the project gathers a network of partners from Genoa and Lecce (IT), Clermont-Ferrand and Rouen (FR), Katowice and Lublin (PL), Skopje (MK), Liverpool (UK), Kaunas (LT) and Aveiro (PT), coordinated by the department of Culture of the City of Valladolid (ES). The CreArt 2.0. is a five-year project that will be implemented in the period 2017- 2021.