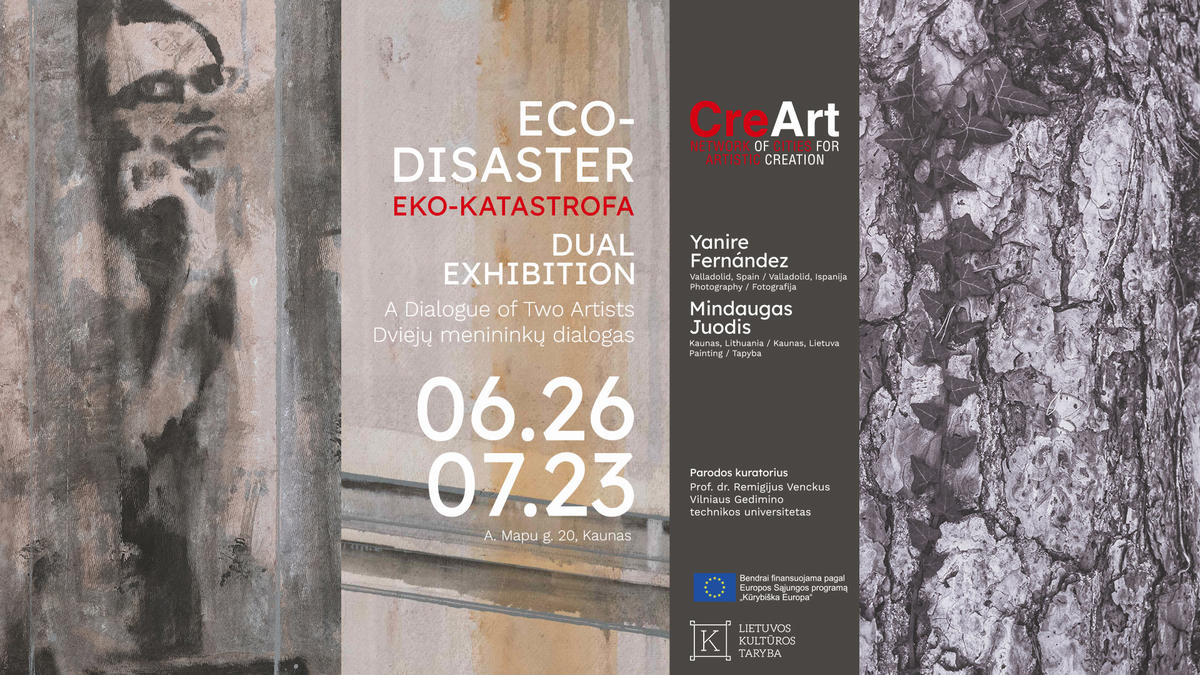 A DIALOGUE OF TWO ARTISTS: ECO-DISASTER

The public debate of climate change and its effects has been quite abundant lately. Rather fierce statements turn up continually in the media, political discussions, meetings of social activists and even private gatherings. Intellectuals have been signalling about the malicious habits of consumerist society that have great negative impact on natural elements. Developed countries agree unanimously upon an urgent necessity of active solutions of the problem, and try to apply innovative, nature-preserving technologies, limiting destructive human action.

This exhibition invites artistic reflection on the phenomenon of the climate change, its effects, its social reactions. Artists are encouraged to represent their individual positions, to critically reflect on and research into the reactions of their environment through various means of expression.

The exhibition tries to emphasize to the audience that art is a powerful instrument of communication; creation is able to contribute significantly to changes in the reality of life, to make society pay attention, to solidify communities. Creators are invited to co-operate and create socially responsible art that would reflect on the controversy of the two concepts (ecology and disaster), on their contradictory meanings and the arising associations – not necessarily convenient or comfortable, but discussion-provoking, yet always centering on the issues of nature.

Yanire Fernandez began her acquaintance with photography and digital art while studying in Valencia. The artist has received financing as a reward for productive creation, which allowed her to travel actively and work in Berlin and Salamanca. From 2015 to 2019 the artist was most active in the creation of graphic design in Salamanca, but at the end of this period she returned to her native city of Valladolid, where she currently resides, working on her artistic expression and pursuing the themes she has begun earlier.

The newest photography of Fernandez marks a purposeful development of her artistic language, at the centre of which we see the realism of every day, the poetry of the environment. The development of this subtle creative focus had begun earlier, with the production of self-portraits and social reports. With time the aim of her artistic work became clear – looking for possibilities of effective representation of reality that would allow to escape from what is created by relying merely on perfect technique and treated like presumably true reality and/ or its image.

Systemic and conscious development of Fernandez’s artistic program determines the mood of melancholic images, suggesting the impressions of loneliness and apocalyptic circumstances. In this way the viewer is encouraged to think of her photographs as results of nomadic wandering.

The photographs seem to register the images coincident with the author’s worldview, sincerely inviting the viewers to re-consider the harmony of the environment in which human takes part on equal terms with his own creations and nature… The photographs open to us the world as a melting substance where everything may be perceived quite intuitively, like a new illusion, an untouched reality or infinite universe. Fernandez asks our opinion about whether we are able to regenerate, to experience the world as a new, unforged and pure substance…

Mindaugas Juodis is an active creator of contemporary painting with an exceptional creative style. He has organized many exhibitions in Vilnius, Kaunas, Šiauliai, Klaipėda, his works have been shown in Cyprus and India.

In the new collection made specifically for this exhibition Juodis raises again the fundamental theme of human nature. He observes that human nature is questioned and defended with voices of politicians who represent the alliance of developed countries. Though political utterances on the necessity to stop human activities that cause damage to nature have been around for decades, the changes are insignificant. Developing the discussion, however, the artist notes that politicians are not only actualizing the problem, but at the same time diverting attention from it. The gesture of destructive consumption becomes more active as soon as the political voice turns to other, smaller, more local issues.

In this way the creative work of Juodis tries to reflect on the fact that ecology begins with an individual human perception of existence, candid political will, genuine and sincere attempt to understand one’s own self and its place under the sun. The infection of endless destructive consumption may be neutralized only through enhancement of society’s self-awareness and personal dialogue with one’s own self

In this exhibition the artist tries to demonstrate once again that painting is one of the many ways to actualize the issue of ecology in the perceptive, figurative and conceptual language of art. Painting develops and strengthens the discourse of ecology, approaching it to people obsessed with various interests.

It needs to be noted, however, that the artist seems to be playing with apocalyptic presentiments, stating a disintegrating legacy of an already non-existent life. Here time and space are not adequate to the viewer’s feelings but synchronized with ‘the syndrome of the end of history’, that was spreading during the whole of the 20th century, and especially during its last decade.

The works of Juodis tell us that turning a blind eye on ecology involves us into active participation in the feast of reality death. The touch of death is best understood whenever we reflect deeply on the ecosystem of daily reality and begin to understand that every minute, second and millisecond of today the harmonious environment is wearing off irretrievably and is increasingly present in the nuptials with death… 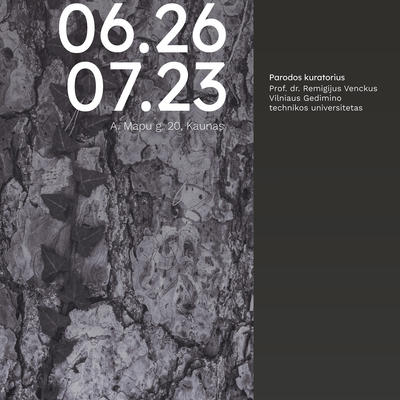 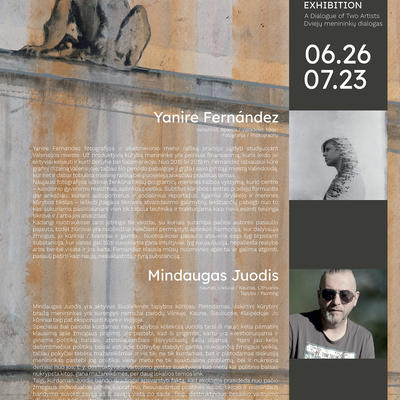