PROGRAMME OF ACTIVITIES 2017 AT ZAGREB 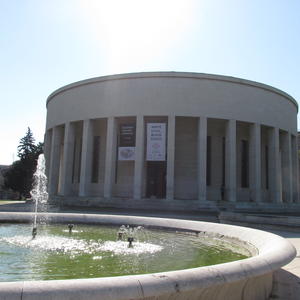 Within the framework of the EU project CreArt, Croatian Association of Fine Artists will once again mark this year’s European day of artistic creativity (March 21) by implementing the project entitled The Aestheticization and Rehumanization of Public Space: The Case Study of Artistic Interventions in Hospital Environment. The project will be realized through collaboration with the University Hospital Centre Zagreb (KBC Zagreb Rebro), the Faculty of Humanities and Social Studies of the University of Zagreb/the Department of Ethnology and Cultural Anthropology, and the Institute of Ethnology and Folklore Research, within the ongoing project City-making: space, culture and identity. As part of the project, six renowned Croatian artists, Tomislav Buntak, Stipan Tadić, Ana Ratković, Damir Sobota, Sanja Stojković and Melinda Šefčić, are creating artistic interventions for the hospital environment of the University Hospital Centre Zagreb, while the students of the Department of Ethnology and Cultural Anthropology are providing the background in research. The results of the project will be presented to the public at the conference on March 21, 2017 at the Croatian Home of Fine Artists, accompanied by an expanded list of speakers on the influence of art on health. This year’s edition of the project is characterized by and aimed at humanity and virtue of an artistic intervention that contributes to overall well-being, prosperity and health of all patients, employees and the wider population of the hospital environment of the University Hospital Centre Zagreb. At the same time, the project attempts to raise public awareness on the concept of art as a constituent part of human health and well-being, especially in the institutions such as hospitals and health centers. PROGRAMME: March 13, 2017 – press conference and the presentation of the artistic interventions at the University Hospital Centre (KBC Zagreb Rebro) March 21, 2017 – conference The Aestheticization and Rehumanization of Public Space: The Case Study of Artistic Interventions in Hospital Environment, HDLU Club Project leader: Melinda Šefčić Supported by: About the EU project CreArt: CreArt is a network of public and private institutions established in European cities, experienced in cultural management and deeply committed to the development of visual arts. The project has been selected within the framework of the Culture Programme of the EU 2012 – 2017. During the last several months, the project has spread into a network including 13 European partner cities and institutions and as such represents the European cultural diversity and wealth. As the representative of the City of Zagreb, Croatian Association of Fine Artists has been a partner since the end of 2013. The backbone of the project lies within promoting and encouraging creativity and creation, while supporting creative industries through activities such as holding conferences on a regular basis, organizing residential programs, exhibitions, educational seminars and workshops as well as monitoring progress in respective cities. CreArt focuses on cultural research in medium and medium-large sized European cities, thus introducing positive change in partner cities, monitoring the successful implementation of plans, publishing the results and passing on the successful models onto less successful cities.