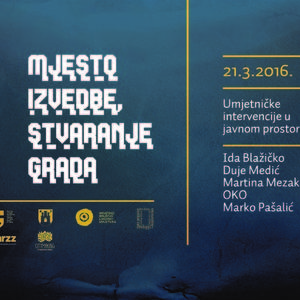 As part of the EU project CreArt, Croatian Association of Fine Artists from Zagreb (HDLU) is marking the European Day of Artistic Creativity by organizing a project Performance site, city-making. The project is implemented in cooperation with the Department of Ethnology and Cultural Anthropology, University of Zagreb and the Institute of Ethnology and Follore in Zagreb as a part of the project City-making: space, culture and identity (HRZZ). The project is designed within two events: the presentation of artistic interventions in five locations in the city's public space on March 21, and the international conference on April 4 2016 in the HDLU Club.
Five artists, Ida Blažičko, Duje Medić, Martina Mezak, Marko Pašalić and OKO are going to perform interventions at chosen locations in the city’s public space. Visits of the locations with an expert guide and the opportunity to talk to the artists will be arranged for the public on March 21. Five students from the Department for Ethnology and Cultural Anthropology of the Faculty of Humanities and Social Sciences at the University of Zagreb will be documenting the project on the locations chosen for artistic interventions.
Consequently, an international scientific conference Performance site and city-making is going to be held on April 4 in the seat of HDLU, with the goal of addressing the issue of sites and non-sites as platforms for creating the meaning of the city, but at the same time as generators of artistic interventions. The conference will be open to the public, and a detailed program will be announced by March 16, 2016.
The project is going to be documented through an accompanying book, which will include the papers presented at the scientific conference and the documentation of the artistic interventions in public space.
The purpose of the project is to combine artistic creation and scientific research as a possible means of encouraging new creative processes aimed at sensitization and transformation of public space as the archetype site for acting outside corporative models and dominant cultural industries.
The project is co-funded by the EU Culture Programme 2007 – 2013 as part of the EU project CreArt, by the Croatian Science Foundation as a part of the project City-making: space, culture and identity, and supported by Zagreb’s City Office for Education, Culture and Sports and the Ministry of Culture.

City-making: space, culture and identity project in more detail
The project is aimed at untangling and comprehending the multiple, multi-layered and interdependent actors, factors and processes of contemporary transformations in the Croatian capital, Zagreb. Two dimensions of the project are singled out as crucial to the transformation of contemporary cities – the politics of public spaces and the politics of difference. Both constitute knots at which global political, economic and cultural flows meet and collide with local imaginaries, interests and developments, bringing about the restructuring of the city and its identity. The project also emphasizes the importance of including city dwellers in these processes, and investigates how they remake, recreate and reconstruct the given social, cultural and spatial landscape (cityscape), adding cultural meaning to it. The focus of the project, the concept of “city-making”, thus refers to a comprehensive construction and articulation of urban life. Art created in public space serves as one segment in creating the meaning of the city and its complexity.
The project is financed by Croatian Science Foundation (2014.-2018.).
More details about the project: www. citymaking.eu 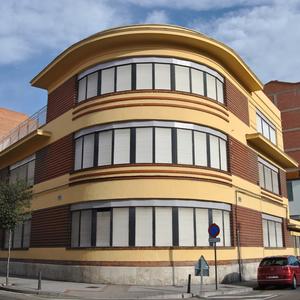 A networking platform for the exchange of ideas, new business models and educational methods for cultural and creative sector